An Adventure In Education

When it came to naming our STAT-focused school for young children and early childhood education, we knew it had to be perfect. With so many options on the table, naming something as permanent as a school can be overwhelming. Do you name it after its founder? Do you name it based on its curriculum and mission? Or do you choose something as mundane as the street that it’s located on? We knew none of these would do, but eventually we were inspired, and the choice became clear — we named the school after prolific scientist Marie Curie.

Whether Marie Curie is a name you only vaguely recognize or one that you’ve devoted hours of your life into researching, we’d like to take some time to enlighten our readers about this amazing woman. The first female Nobel Prize winner, and an esteemed scientist who made astonishing progress in the field of radioactivity, it’s no wonder why she’s an inspiration to so many people. Here are some fun facts about Marie Curie:

Winning the Nobel Prize is an iconic, life-defining achievement for pretty much anyone. It’s not just something they hand out like candy, and if you’ve received one, you can probably safely assume that you’ve put your life to good use. But winning one prize wasn’t enough for Marie Curie; she won two Nobel Prizes, one after the other. She’s just that awesome. She’s the only person who has ever won the prize in multiple sciences, and it’s for this reason that we couldn’t think of a better person to be the namesake of our STAT-based school.

Unfortunately, we live in an era where education is undervalued by many — even though it’s more readily available than it’s ever been in human history. Education is truly something that we take for granted, and when you look at the remarkable effects it can have on a curious human mind, it’s a wonder that society as a whole doesn’t place more value on it.

Take Curie, for example. Her parents were teachers who believed strongly in the value of learning and exploring intellectual pursuits. This no doubt rubbed off on Curie herself, who would go on to be an educator in certain phases of her life.

In the Curie bloodline, incredible world-changing scientific advancements seem to run in the family. Indeed, Marie Curie’s daughter Irène devoted her life to continuing her parents’ work, and eventually made new breakthroughs in the science of radioactivity, earning her a Nobel Prize.

This is inspiring to us as educators, because it impresses the importance of what children can achieve when they’re stimulated by a thirst for knowledge. It shows us that Curie wasn’t just an exceptional, one-time occurrence. Because she was diligent in teaching her children and cultivating a love for learning, they went on to achieve great things. We very much believe that no child is locked to the “potential” of their bloodline. Nurture plays a significant role in where they’ll go in life, and we strive to provide the best learning environment possible for our students. 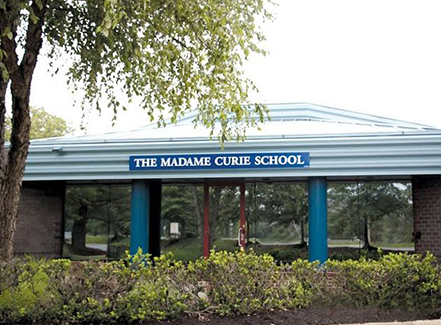 Here’s another tidbit concerning Curie and education — did you know that females weren’t allowed to enroll in higher education during her time in Russia? While that may have stopped some people, it sure didn’t stop her. Going against the rules, she attended a Polish university, but she couldn’t afford to go abroad and earn a true degree. So what did she do instead? She got to work. Curie and her sister worked tirelessly, working part-time and pursuing their studies simultaneously. Eventually, they earned enough to make it on their own, and the rest is history.

Another reason why we deeply respect Marie Curie is that she is a legendary example of someone whose achievements were purely the result of her own hard work and diligence. Some people often end up doing great things because they had a lucky break, or financial backing to support their ambitions. Curie had no such thing; she worked nonstop to pay her way through her education. At times, the financial toll was so heavy that she couldn’t eat. And we’re not just talking lonely nights with tummy grumbles — she quite literally fainted from hunger on multiple occasions.

We consider ourselves extremely lucky to be in a place such as Chantilly, where there is a good quality of life. While Curie deserves inestimable admiration for her trials, we appreciate that our students can learn and grow in more favorable circumstances. Regardless, Marie Curie will always be a symbol of the true grit and determination that can lead people to do great things.

Society has come a long way since the days of Curie, and although there’s always room for improvement, we’re happy girls and women have countless more opportunities than they did in those older days. Despite Curie’s astonishing breakthroughs in the field of radioactive science, the Nobel Prize committee was reluctant to give her the award. Why? Because she was a woman.

That’s not to say they didn’t recognize her achievements — they just wanted to credit them to her husband instead. Luckily, Curie’s husband was an advocate for women’s rights and a loving spouse, and he fought for her inclusion in the award. They eventually conceded, and it was a monumental moment for women and young girls all over the world. Curie would become a symbol for anyone and everyone who pursued their ambitions in the face of great oppression.

Curie Tried to Donate Her Nobel Prizes to the War Effort

Curie’s achievements happened shortly before the devastating World War I, and at the time, she lived in France. Once the conflict started escalating, France called out for extra gold to be melted down to contribute to the effort. Marie Curie, ever humble, offered to have her Nobel Peace Prizes melted down. The folks in charge were appalled by this, because who would want to give up their medals?

Although they didn’t let her donate her medals, she did end up donating her prize money to the war effort, and this just goes to show how much of a heart she had. At our school for young childhood education, we don’t only focus on teaching kids new knowledge — we also know that human attributes such as humility, kindness, and empathy are equally as important. Curie was not only a groundbreaking scientist, but she was also an exceptional role model.

With all the facts above in mind, it’s easy to see where the Madame Curie School of Science and Technology got its name. And, above everything else, our mission is to cultivate the minds of young children so that they, too, may become Curies in the future. Are you interested in giving your child a high-quality, STAT-based education which focuses on meaningful growth and personal development? We encourage you to contact us today. If you’re in Chantilly, Herndon, or other nearby regions, there’s no better place for your son or daughter to begin their education.

We have designed unique programs for each age group, starting from 18 months all the way up to 5 years old. Our curriculum emphasizes engaging, hands-on activities.

From pre-kindergarten to after-school programs and summer camps, our programs are innovative and focused on STEAM++ education.

We have two conveniently situated locations in Southriding and Herndon, making it fast and easy to reach one of our locations from any part of town.